On this week’s Story Matters Podcast (which you should all listen to, right after you listen to it’s host, Curt Mega, on my podcast), Corey Lubowich said, “If you can’t fix it, feature it.” It’s a phrase I’ve heard before, of course, but for some reason it’s resonating with me this week as the secret to everything in life. Just be you. Be the best you you can be. Fix the things about yourself that you don’t like, but then just be honest and upfront about who you are, and you’ll attract the right people. 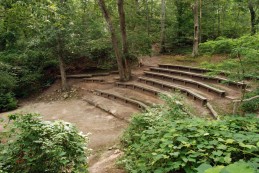 moments have happened there, when directors embraced the “if you can’t fix it, feature it” philosophy in dealing with the real challenge of putting on a production in the middle of the woods, at dusk, where there aren’t good places for the actors to hide when they’re offstage (unless you build a set, which has to be weather-proof). Here are some of my favorite moments of all time.

So Corey Lubowich is exactly right. If there’s something you can’t change, face it as a challenge, and use it to make yourself more brilliant.

by nine members of the cast of In Transit, including former Warbler Telly Leung.

Just tweet to @elsiepod (that’s me!) using the hashtag #ElsieTransit to enter. Drawing Friday, May 19th. Details here and on the podcast.

Elsie Cast is a fan podcast celebrating Broadway, musicals, and the all-day musical extravaganza that is Elsie Fest. More about Elsie Fest at www.elsiefest.com
%d bloggers like this: